When Tall & Handsome and I married I had a beautiful home I had retained possession of after my divorce from Gomez the unremarkable. After all my folks had given me the down payment for our first house and over the years gifted us with cash to make improvements on subsequent homes, plus probably a little unknown fact to a lot of people is I was a pretty able do-it-yourselfer.

I could handle a few power tools myself, climb scaffolding to help paint the outside of the house, was very apt at painting the inside and was a good second hand to have around for other tasks. In addition I was just a few credit hours short of having an Associate’s degree in horticulture, so before I became disabled I spent many hours in the yard lovingly planning out beautiful landscapes. I had big ideas… (By the way, the reason I never finished that degree is I dropped out of school to nurse the aforementioned Gomez, also known as Short & Stubby, back to health after he was in a car accident and broke his neck. Girls, just goes to show no good deed goes unpaid…)

By 2003 I had helped rehab two homes and add over 1,000 square feet to my current home plus help family members with projects.

I had moved into this house in late 1998 and Gomez left the family in May of 2001…on our son’s 21st birthday to be exact. By then the inside of the house was in good condition and the outside was on its way to developing into something. I had established certain plants…hostas, azaleas, Japanese maple, butterfly bush, pincushion flower, black-eyed susans, purple coneflowers, day lilies, baby’s breath, herbs, Rose of Sharon, forsythia, oak leaf hydrangea, crepe myrtles and more. I was gardening for scent, food, birds and butterflies…

I went to work after Short & Stubby, aka Gomez, left. A tornado came through and did some damage to the house one day when I was by myself and I meet Tall & Handsome. My health continued to decline and my specialist removed me from work. T & H and I married in late 2003 and when we did the house went up for rent so I could live where he was working.

When I found the tenant, I’ll call Big Jim, I knew he had peccadilloes so to speak. He stands well over six feet tall…maybe six foot four and weighed a good three hundred pounds and then some if he weighs an ounce…he could literally fill a doorway. The man can talk the ear off the elephant and that says a lot coming from me since I’m a chatty gal myself.

Some things over time just began to feel hinky…for one he always paid the rent with money orders and it was just about never on time. He let it be known he didn’t really want Uncle Sam knowing what his business was, yet he said at one time he was a US Marshall or CIA agent or some such shadowy figure or another. At the time he was working as a locksmith for a local company and worked out of town a lot.

But, he talked a good talk and he talked like he would be a good tenant, respect the place and take care of it and was looking for a decent home for his family…

To his credit he seemed to be family oriented, but that also, in the long run seemed to be a factor that worked against T & H and me. Why? Read on…

He moved into the house his mother who I’m told was disabled, one grown son, one son who over time grew up and lived there periodically, and one disabled uncle who had a leg amputated while living in the house and had a wheelchair added to the mix. I don’t know who else might have been there but at one time 10 cars were parked on the lot! It also appears no one in the house cared to do much house work or chores, yard work, but they sure did like to do a lot of greasy cooking and totally fried the appliances…

Big Jim moved out in January owing a substantial amount of rent and without the proper advance notice. When T & H and I went in we were stunned. My Dad told me later when he saw the house he wanted to cry for us. A nice home that had been relatively new had been demolished in matter of six short years.

Some doors now have three lock on them…yes, he added locks to doors without getting permission, shelves were torn from the walls in closets, kitchen appliances needed replacing, holes were drilled into the floor in different rooms, woodwork was banged up where the wheelchair crashed into it, carpet was ruined, the yard was ruined…where I once had a Bermuda lawn in the front now stands “parking slots” where he parked cars in the front yard. At one point I had to have the septic tank pumped because they were flushing baby wipes down the toilet. When I queried Big Jim about it, he swore they didn’t use baby wipes, but when T & H recently pulled a toilet to replace it, lo and behold there were baby wipes under the toilet. When everything is totaled I would guesstimate the damages will be between $20,000 and $30,000.

So, over the last several weeks, T & H has been spending a lot of time at the house rehabbing and hopefully restoring and making it better than before. I go up and help when I can. When I look out over the landscaping I get sick to my stomach remembering what was…but, I see rays of hope and survival. Yesterday when I was at the house I was in the yard pulling out invasive honeysuckle and wild shrub and like in the house I began to see those sparks of hope.

While walking the fence surveying what was there I suddenly saw something new and wonderful…something that had not been there when I left…it was a reminder of why I built that house up on that little mountain in Alabama several years ago…because it reminds me of back where I come from…my roots in the foothills of the mountains of East Tennessee…you see, there growing under the trees along the fence, untouched and surviving the reign of Big Jim was a native Southeastern trillium…a nice little welcome home present.

It was beginning to feel good to be back home again… 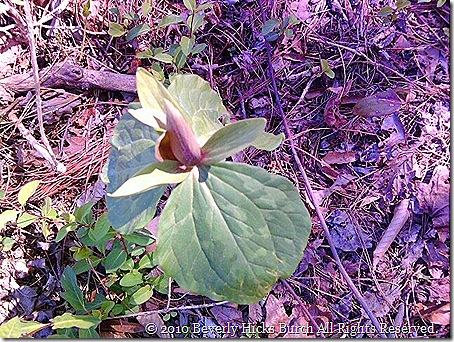 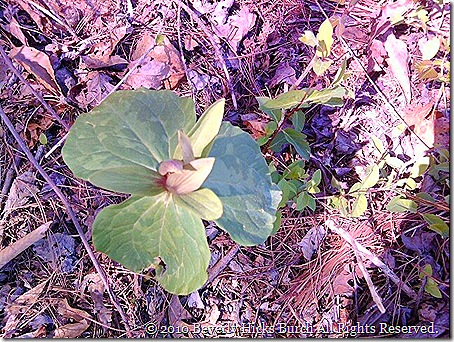 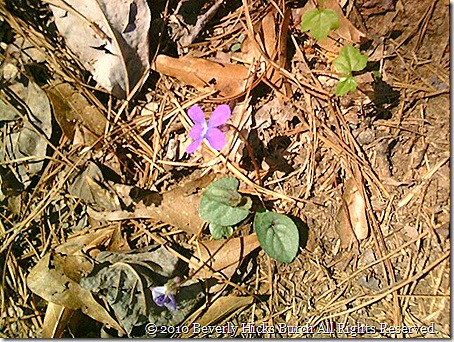 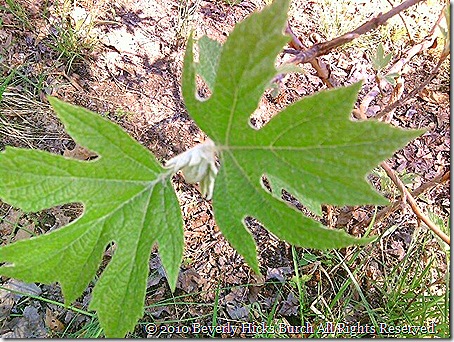 Tall & Handsome roasted multicolored bell peppers on the grill. I've brined them and our 1st jar of roasted red, yellow and orange bell peppers are in the fridge. Yum! #roastedpeppers #food #foodofinstagram #diy #wedidthat
Teapots #teapotsofinstagram #teapots #teatime
Just outside of the tornado polygon. Head to the basement? #tornadowarning #honorthepolygon
Can't wait to see what spring brings. #rainyday #weatheradvisory #nodroughthere #itsjustfebruary
From my 1st pot of Instant Pot Greek yogurt. So easy, 3 ingredients. No boil method. Served up with fresh blueberries, walnuts and a drizzle of local honey. #instantpot #yogurt #probiotics #foodofinstagram #cooking #newtoy #sogood
Indian Egg Rice, Spinach & Cashew Rice and Potato & Tomato Curry oh, soooooo good! #healthyfood #indianfood #rice #curries #egg #potatoes #tomatoes #spices #instantpot #food
Tall & Handsome and I have been doing R&D in Indian cuisine. Some of our first investments were a balti pan, masala dabba and Indian spices - whole & ground. We are loving it and have developed several for our instant pot. Many are plant based. #masaladabba #indianfood #indianspices #r&d #food #T&H
On the design wall. Finally got the borders on and corners mitered on Mariners compass quilt. Basting and quilting next. #quilt #quilting #wallhanging #quiltsofinstagram #marinerscompass #designwall #beenbusy #isaididnevermakeonebutidid #happy #textiles
EARLY morning light reveals signs of fall. Leaves are falling and cascading into my big container of Greek oregano. Only problem - one day away from Oct and temps are still 90+ degrees. #fallingleaves #greekoregano #earlyearlymorninglight #wholetthedogout #reallyistimeforfall #octobereve #hurryupcoolweather
This can show up any old day now! Puh-leez!! I'm so sick of summer. #hurryupfall #timeforautumn #fallinalabama #fallcolors #Godspaintbox
Yep, it's that time of the year. Tall & Handsome cranked up his Weber and is roasting his beloved Hatch chiles. #Hatch #HatchPeppers #roastingHatchPeppersinAlabama #weber #onthegrill #pepper #thattimeoftheyear #fall #nativeNewMexican #TallandHandsome #chiles
Truth. And, mine is Tall&Handsome. #❤ truth #countedcrossstitch #myhusband
Every 9/11 I look at this picture and my heart breaks into pieces. This is my sister Pam and me, ca 1983 or 1984 in NY. We later went to the top of the Trade Towers. #memories #NYC #TradeTowers #neverforget #wherewereyouthatSeptemberday #💔
Bev (me) about age 2 in Fort Worth, Texas. #throwback #toddlerpicture #me #bev #bamasteelmagnolia #texas #wherehasthetimegone
Inspiration. Creativity. We love spending time in this room. #inspiration #creativity #quiltroom #quiltroomsofinstagram #ilovemyberninas #quilts #quilting #handiquilter #hubbyandibothquilt
My, how my garden is growing. Pineapple sage, mint and for color an Abundance of black-eyed Susan. And, a Schnauzer ❤🐕. #gardening #containergardening #pineapplesage #mint #rudbeckia #Schnauzers #outdoors #nature #summer2019
Purple basil thriving in my kitchen herb. #kitchenherbgarden #purplebasil #herbs #herbsofinstagram #containergardening #plants #nature #outdoors
Peruvian Lily also known as Inca Lily of the Valley #peruvianlily #incalilyofthevalley #flowers #blossoms #red #flowersofinstagram
Schnauzer in the garden. My little buddy may be gone (RIP), but this little fellow holds his own in the herb garden. #Schnauzers #dogs #inthegarden #herbgarden
BabyGirl went to the beauty shop and got her summer cut. She's still a little said because brother (Watson) is gone. (RIP little fellow.) But, BabyGirl is doing better eating a little better. Her "smile" has even come back on occasion. #pets #petsofinstagram #dogs #dogsofinstagram #miniatureschnauzer #miniatureschnauzerofinstagram #BabyGirl #ilovemyschnauzers #summercut #backfromthebeautyshop #westillmissbrother #happydog #MomsGreyGhost #Momssugarbuggar