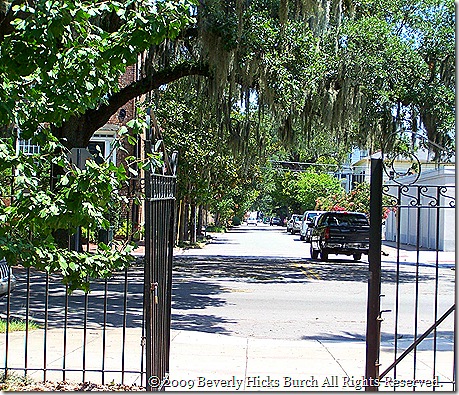 A few years ago I was in Savannah, GA on business. I was there by myself so I did a little wandering. I didn’t have much time. I was only there for a day.

Savannah is the quintessential Southern city. You can still feel the Old South there, especially downtown.

This picture was taken on “lawyer’s row”. The street is line with old brownstone after brownstone that now serves as the offices of pricy law firms.

Imagine my surprise when I discovered I was parked  by Colonial Park Cemetery!

This cemetery if the second oldest in Savannah and was established in 1750 by British colonist. It served as a major cemetery in Savannah for a little over 100 years, closing for interments in 1853.

The cemetery covers six acres and there are 9,000 souls laid at rest at Colonial.

The cemetery is not without renown. Over 700 souls who lost their lives to Yellow Fever are buried here. There is a “Duelist” section dedicated to the burial of the fallen participants in duels that took place in and around the cemetery.

Several very distinguished people are buried here including Button Gwinette who was a signer of the Declaration of Independence. Ironically Gwinette was killed in a duel by Lachlan McIntosh, a Revolutionary War hero. Both men are buried in Colonial Cemetery and both men have counties in Georgia named after them. Go figure…

And, what respectable Southern cemetery doesn’t have its fair share of resident ghosts? It’s fair to say Colonial isn’t to be out done in this category either…the most famous of which is a disfigured child murderer.

You have to hand it to us Southerners…nobody can turn out angst like we can. That’s why we’ve given you the likes of Tennessee Williams, Zelda Fitzgerald and Truman Copote just to name a few…

Today’s picture is one of the gates from Colonial Cemetery Park. I’m standing inside the cemetery looking outwards through the gate onto Oglethrope Street. As I took the picture my first thought was, “that is truly the gate of final haven”.

2 thoughts on “The Gate of Final Haven, by Beverly Hicks Burch”