“Often it was the most unlikely people who found within themselves a spark of something greater. It probably was always there, but most people are never tested, and they go through their whole lives without ever knowing that when things are at their worst, they are at their best.” ~ Jonathan Maberry, Rot and Ruin ~ 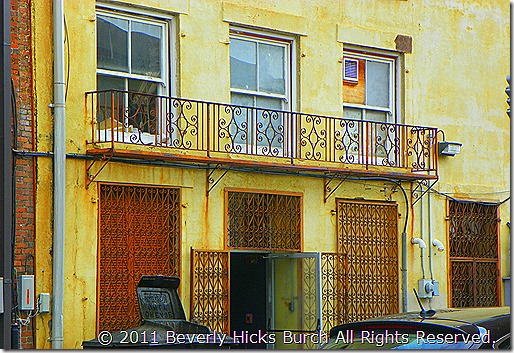 I have a thing for old iron work. Especially old wrought iron. It could be because I’m a Southern girl and wrought iron ruled the day a couple of hundreds years or so ago here in the South. Wrought iron was king in places like New Orleans, Charleston and Savannah.

In April of 2011 Tall & Handsome and I found ourselves in Savannah, GA. The event we were participating in was a catered dinner for the cancer survivors for the Relay for Life that was to be held the next day. The dinner was held in one of Savannah’s lovely downtown parks full of stately old Southern Oak trees which provided a canopy of shade in an already balmy spring weather. It was a perfect setting for Gone with the Wind.

T & H had dropped me off at the park, then parked our vehicle and walked back to join me. So, after the dinner was over, I had my first chance to see where he was parked. I was stunned to say the least.

There just yards off major city blocks and stately parks were old Southern buildings in various stages of dilapidation and ruin. How sad, I thought. One thing in particular caught my eye, and that was the old wrought iron still on many of the buildings (and some that had been added as forms of security).

I wondered what stories this buildings could tell…what history they had seen. Regardless, there was some kind of spark there and they had persevered…they were still standing.

I shared a common trait with these old Savannah buildings and their rusty wrought iron. The very reason I was there spoke to that fact. I was there to participate in the Relay for Life run/walk as a cancer survivor.

In 1982 at a very young age I was diagnosed with a rare type of lung cancer in my right lung. I had never smoked nor had any of the other risk factors that would have pegged me as a candidate for lung cancer. My son was 18 months old at the time.

This was one of my first big tests…

I prayed to God for the strength to survive and live as normally as possible to see my baby graduate from high school. And, I did…

In the ensuing years I raised a son, developed multiple autoimmune disorders, osteoarthritis; I was stalked for many years and then, in 1995 was told I had an aggressive form of cancer in my left lung. Sixty percent of my left lung was removed.

There were times I didn’t think I would survive…

When I met T & H he told me I was one of the strongest women he had ever met. I’m such an unlikely person to be placed in that category. I  found it hard to believe that such a “cosmopolitan” man like him who has travel all over the world and worked with and met so many people…both men and women would think of me in that fashion. But, he does. He also says I’m a survivor as do many other people who hear my story…the entire story.

Life still tries to throw me curves…us curves, tests and trials. And, we get through them…and keep standing much like this old building with the rusty wrought iron.

Today’s quote even reminds me of what James said: “Consider it all joy, my brethern, when you encounter various trials, knowing that testing of your faith produces endurance.” James 1:2-3

So, yep, I’ve been tested…a lot, and my wrought iron is rusty, but I want to let that testing find the spark of something greater in me…

2 thoughts on “The Spark of Something Greater, by Beverly Hicks Burch”